It’s one week to the start of the new English Premier League season. Usually, this is the most exciting times of the year, and as usual, you will expect various sports experts and pundits to make their stand by picking up their teams as well as their players of the year.

It’s also the time that various bookmakers in the UK and across the world offer lucrative Premier League Odds based on how various teams perform.

The 2015/2016 season will no doubt be the memorable one for years to come in the history of football after Leicester City, with premier league odds of 3000/1 to win the title beat some of the powerhouse teams and secure the title.

Currently, most of the bookmakers in the UK have over 80 Premier League markets for the 2017/2018 season and range from the usual “Title Winner” option, the “Top Goal Scorer” market to the unusual markets such as Arsenal not finishing within the top four or Sunderland to go down. Below, we look at some of the new markets available as we head into the new season.

As we start the premier league, it’s evident that the first three matches do not seem to favor any team. Arsenal are opening their season with a visit to Anfield; Chelsea are playing against West Ham at the Bridge; Tottenham is also facing Everton in a match that will be hotly contested while Manchester City is expected to play Stoke City sometime in the month. 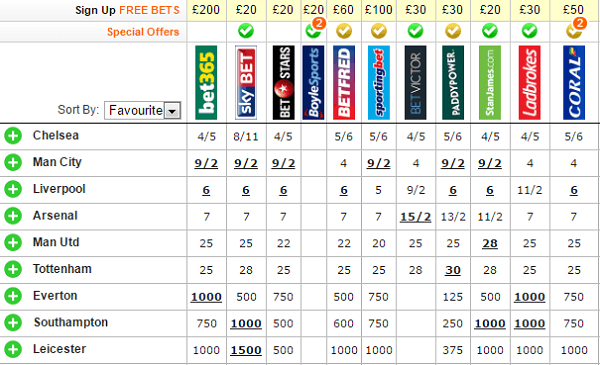 This leaves Leicester City and Manchester United looking like the teams that are going to end the month of August with a 100% record.

Jose Mourinho has vast expertise in the primer league having already coached Chelsea several times, seems to have the odds favoring him to win his first three games.

Having the ability to grind out nasty wins, Jose’s boys will travel to Bournemouth for their opening match, play Southampton at the Old Trafford before playing Hull City at their home ground on 27th August.

With Premier League Odds of 9/4 to win the first three matches, it’s worth placing a bet on Manchester United.

Alternatively, Leicester City’s title-winning momentum and exemplary pre-season performance should comfortably see them through the first month with wins against Hull City, Swansea, and Arsenal – whose possession-centric and high backline approach should make them vulnerable to becoming the main headline of August.

Team to Score the Most Number of Goals

With Manchester City, Manchester United and Chelsea all in transition this season, it’s very unlikely that they should be shortlisted as contenders for the teams to score the most number of goals.

These teams have new players as well as managers and don’t have the kind of cohesive attacking play that is required to score the number of goals. 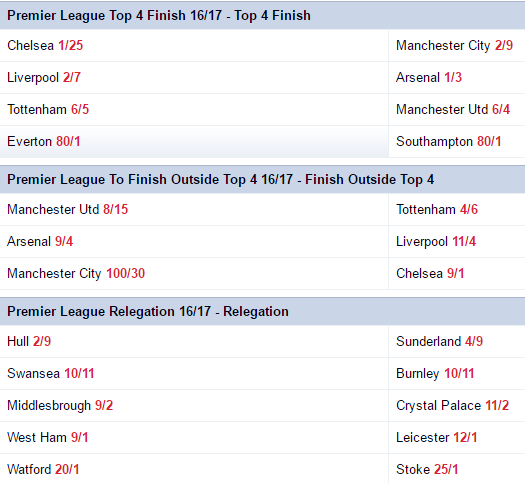 Jose Mourinho has in the past been labeled as a cautious manager. As the Real Madrid head coach, the team scored 300 league goals even though Chelsea only managed to score 71 goals as they proceeded to win the 2015/2015 title.

However, given the fact that he is managing a different team with different tactics, it’s very probable that he is going to bring back Sir Alex Ferguson’s rescue explosive attacking the football.

The premier league odds seem to favor Manchester United as the team to score the most number of goals at odds of 9/2.

Manchester City, on the other hand, is widely expected to score freely under their new coach, Pep Guardiola.

However, adapting to the English Football may take some time for the ex-Catalan player and coach given much of the English teams will try to keep his possession-centric style of football in check by sitting back and absorbing the pressure. At premier league odds of 11/8, they don’t seem to be the favorites at all.

On the other hand, Antonio Conte’s three winning title sprees at Juventus only saw him get an average score rate of only 73 goals per season, making Chelsea a poor option for the most number of goals per season market.

In fact, the bookmakers strongly back my opinion by giving Chelsea premier league odds of 8/1.

This position has been left for one realistic contender; bar a miracle and managerless Hull City. Despite receiving a new sponsorship deal from Kenya’s Sports Pesa bookmaker, the team is yet to make any notable signing this season or recruit a new coach will raise the players’ spirits as they head into the new season.

Moreover, they lack their main midfielder, Mohamed Diame who was pivotal in their promotion campaign. 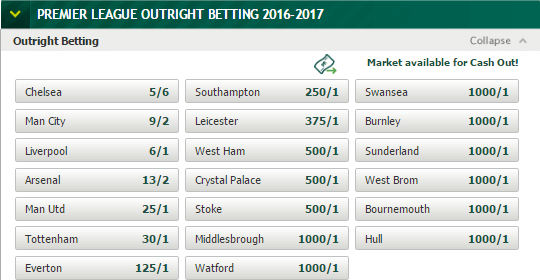 Being the weakest team of all the three promoted clubs, Hull City seem to be threatening Derby’s record low tally this season and are destined to drop back into the championship at the end of the season.

At premier league odds of 11/4 to be bottom at Christmas, it's highly recommended to stake a cheeky 20 pound on the bet.

Watford, Sunderland, and Swansea are bound to be drawn into the relegation battle. The first mentioned team, Watford, are most likely to suffer from a second season syndrome.

Swansea has been struggling over the past seasons and is currently playing with one single top striker. Sunderland is likely to start off the season with a slow momentum after Big Sam was replaced by Moyes.